In metallurgy, in glass ceramics and in polymers, crystallisation is the process in the cooling process in which crystallites are formed, either by themselves or by added nucleating agents and impurities [3, section 2.5.7]. Due to the main field of application of DSC, crystallisation in polymers is considered here. Crystallites are ordered molecular chains of polymers that form a crystal structure through regions of long-range order. Previously, these molecular chains existed in a disordered amorphous and thus a sufficiently high temperature. The slower the cooling, the better the crystalisation can be detected. This gives the corresponding molecular chains more time to orient themselves. However, crystallisation can also be caused by strechting due to mechanical influences in a cold state. When heated up again, recrystallisation can occur. This recrystallisation, also called cold crystallisation, is between the glass transition temperature and the melting of the polymer. The cause of this exothermic reaction is the further orientation of the chains as a result of the softenign of the material after the glass transition point. Due to the softening, the molecular chains can oscillate better and subsequently orient themseleves to form crystals. In the process, new crystallisation nuclei can be formed as well as existing crystal grains can grow. In the process, new crystallistion nuclei can be formed as well as existing crystal grains can grow. In the practice of DSC measurement, crystallisation maifests itself possible to determine the degree of crystallinity K by means of DSC measurement. Crystallinity, degree of crystallisation and degree of crystallinity are used synonymously in the technical literatire and indicate what precentage of the polymer is crytalline. In practice, completely crytalline polymers are of little importance, as they can only be produced by complex annealing just below the melting temperature. A prerequisite for determining the degree of crytallinity is konwledge of the theoretical enthalpy of fusion ∆Hlit for completly crystalline material. According to

the degree of crystallinity can be calculated as percentage [5, p. 75]. A second heating can thus determine to what extent the crystallinity for this sample was influenced by the thermal an mechanical history. If a recrystallisation peak occurs during the heating process, this is subtracted from the enthalpy of fusion and the result is divided by the corresponding literature value [5, p. 75]. This can be summarised by 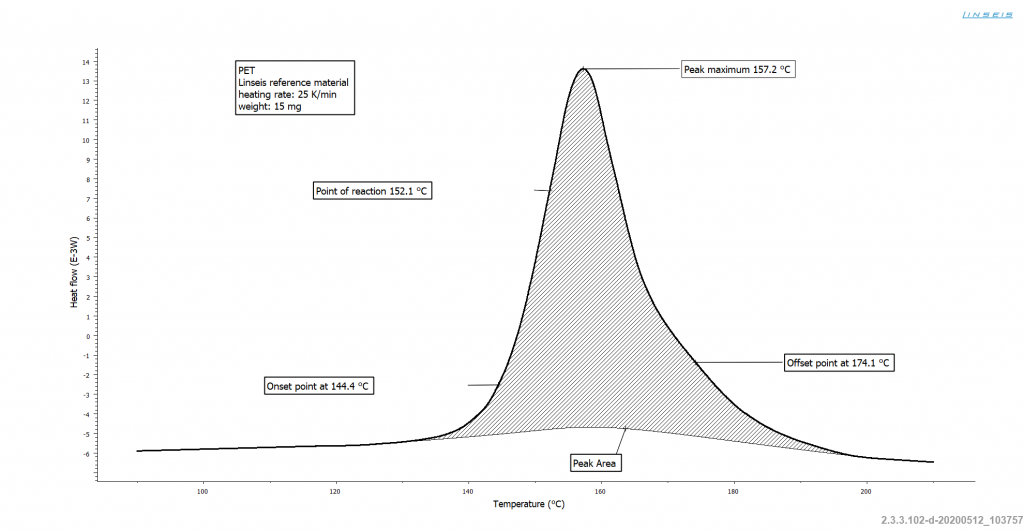 in Fig. 10 the relevant temperatures and designations of a cold crystallisation during heating.

Shown in Fig. 1. the relevant temperatures and designations of a cold crystallisation during heating