The extent of crystallization depends on the conditions under which the plastics become solid. The temperature during solidification and the speed of the temperature change have a decisive influence. 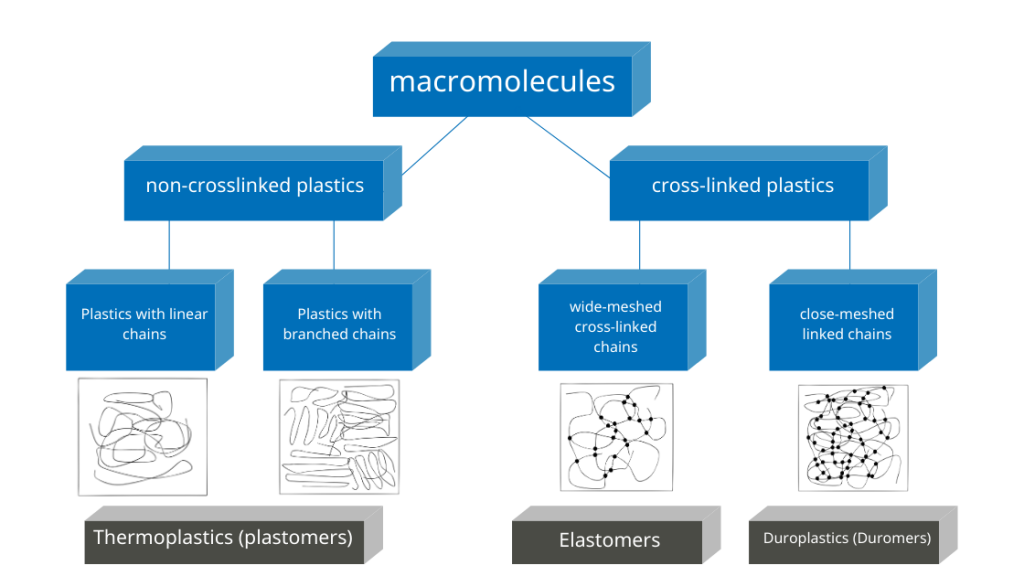 Material properties depending on the crystallization

Crystallization in the plastic increases its density, glass temperature, melting temperature and solidity. As a result, dimensional stability and resistance to mechanical abrasion are also improved. At the same time, the coefficient of thermal expansion and the penetration capacity of liquids and gases decreases. These properties extend the range of applications for semi-crystalline polymers.

The transition from liquid to solid state in polymers can be achieved in two ways: Either a molten polymer solidifies or it precipitates from a supersaturated solution. In this process, the macromolecules lose a large part of their kinetic energy, which is released to the environment as heat.

Within a limited temperature range, the ball-shaped molecule chains can “stretch out”. In doing so, they arrange themselves in parallel structures, which are made up of a folded macromolecule – similar to a fire hose or cable laid in bays. In some polymers, chains of different molecules also align themselves parallel to each other. The formation of such structures is called crystallization.

The formation of the crystal structure requires a starting point, which is called the crystallization nucleus. Such a nucleus can be the smallest quantities of already crystalline polymers or foreign molecules such as quartz. The crystal grows around this nucleus until it encounters other crystals or amorphously solidified material areas. By adding crystallization nuclei to the melt or solution, the number and thus the size of the crystals can be influenced.

Which substances are suitable as nuclei depends on the individual polymer system and must be determined experimentally. The time required for crystal growth and the optimum temperature range are also determined by experiments. The thermal analysis methods are suitable for this.

Recrystallization is the new formation and transformation of crystals. This process occurs involuntarily when the temperature of crystalline or semi-crystalline materials reaches a certain value or when polymers are deformed by external mechanical forces. It is also related to the increase or decrease in the mobility of the particles. Recrystallization can be used in a targeted manner to bring about the required material properties. Various processes are available for this purpose.

This process is used in the production of synthetic fibres, films and hollow bodies. Synthetic fibres and films are produced by extrusion of the heated polymers. During this process, the material is pressed under high pressure through nozzles or similar openings and takes on their shape.

Tensile forces are then applied, causing the molecular chains to stretch and arrange themselves in parallel. Hollow bodies (canisters, bottles) can be produced from blanks which are expanded by an overpressure in the interior. The tensile stresses that this creates in the material lead to crystallization.

Recrystallization from the solution

The prerequisite for crystallization is to maintain the optimum temperature and the time required for crystal growth. Recrystallization can be supported and controlled by adding condensation nuclei (“inoculating” the solution).