Figure of merit is used to determine the efficiency of thermocouples and thermoelectric generators. In the corresponding formulas, the figure of merit appears under the name ZT.
A temperature difference at the ends of an electrical conductor causes an electrical voltage in this conductor. The connection was first described by Thomas Johann Seebeck. It is therefore called the Seebeck effect. The amount of tension depends on the material used. The ratio of electrical voltage and temperature difference is referred to as Seebeck coefficient.

The Seebeck effect is used primarily for measuring temperatures with thermocouples. It is becoming increasingly important in the conversion of waste heat into electrical energy by thermoelectric generators. The processes are reversible. The reverse process, in which temperature differences are produced by voltage differences, is the Peltier effect. It is used, for example, for cooling or heating in microelectronics and nanotechnology.

In the simple definition equation:
ZT = Seebeck coefficient squared * absolute temperature * electrical conductivity / specific thermal conductivity the material values ​​must be taken into account as a function of temperature and time.

These difficulties can be overcome by measuring the ZT value. For the determination of the figure of merit for electrical conductors and semiconductors, Linseis offers precise measuring instruments which determine the individual material values ​​and deliver the ZT value. 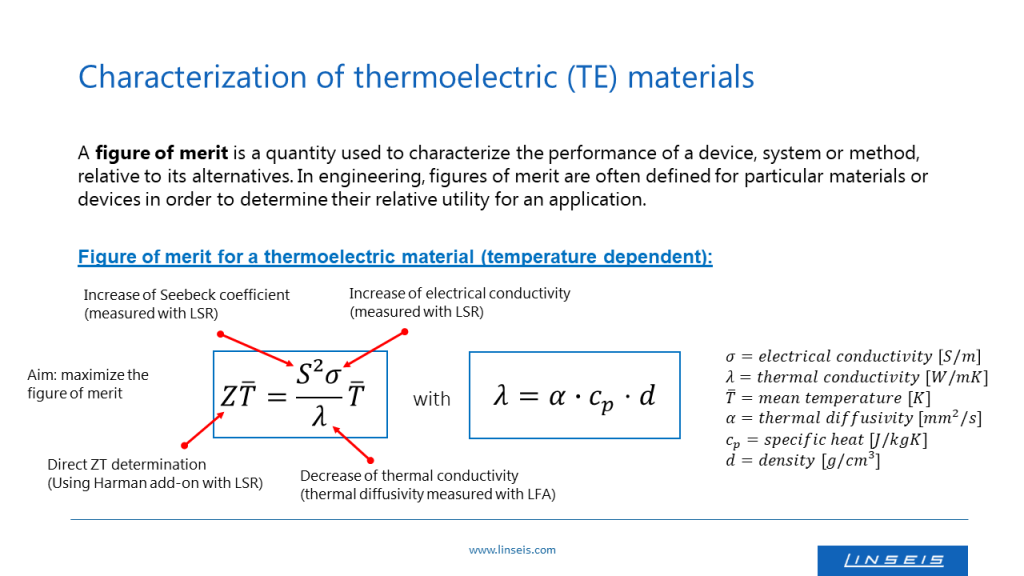 You are working in the field of analysis of thermoelectric materials and would like to learn more about the determination of the ZT value and others? Take a look at our webinar!