The heat flow is the measure of the energy transfer, which is caused by a temperature difference and leads to the temperature balance between substances. In this context, the energy is called heat.

The processes in which heat is transferred take place as heat conduction (conduction), heat flow (convection) or heat radiation (radiation).

Each process is described by its own formula, with which the heat flow can be calculated.

In engineering this value is needed for the calculation of heat losses, for the design of heat exchangers and for the determination of the energy requirements for cooling and heating. The formulas used contain purely empirically determined substance sizes, which only approximately reproduce the actual property of the medium.

The fabric sizes are also temperature-dependent and change during the processes under consideration. That is why measuring instruments with heat flow sensors are used for accurate results. The heat flow sensors exploit thermoelectric effects. During the measurement, electrical variables are detected that change as defined by the heat flow and thus allow conclusions about the heat flow. 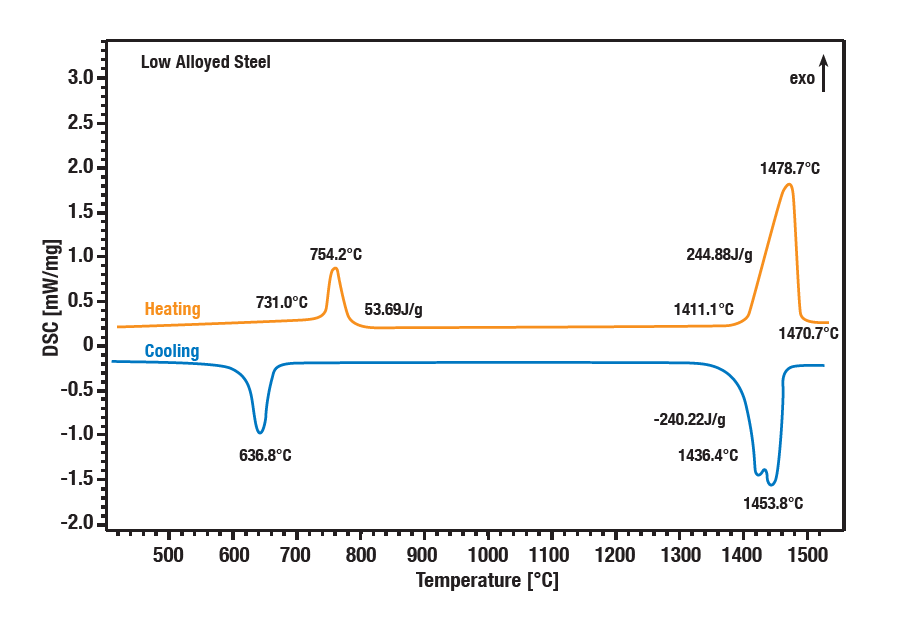 Introduction and Application: Steel is a metal alloy. The most constituent parts are Iron with carbon being the primary alloying material. Carbon is the most cost-effective alloying material for iron. It exist further alloying elements such as manganese, chromium, vanadium and tungsten. Varying the amount of alloying elements remarkable change of the properties (hardness, ductility, tensile strength, phase change behavior) received. Differential Scanning Calorimetry (DSC) is a helpful instrument in order that steel get the favored properties.

Analysis using DSC: In the picture can be seen the measured specific heat flow rate of a low-alloyed steel. At 734°C happens the change in the crystal structure (from body center to face center) and change in the magnetic properties (ferromagnetic to paramagnetic) occurred. The melting point was measured at 1411°C. The liquidus temperature was measured at 1473°C. 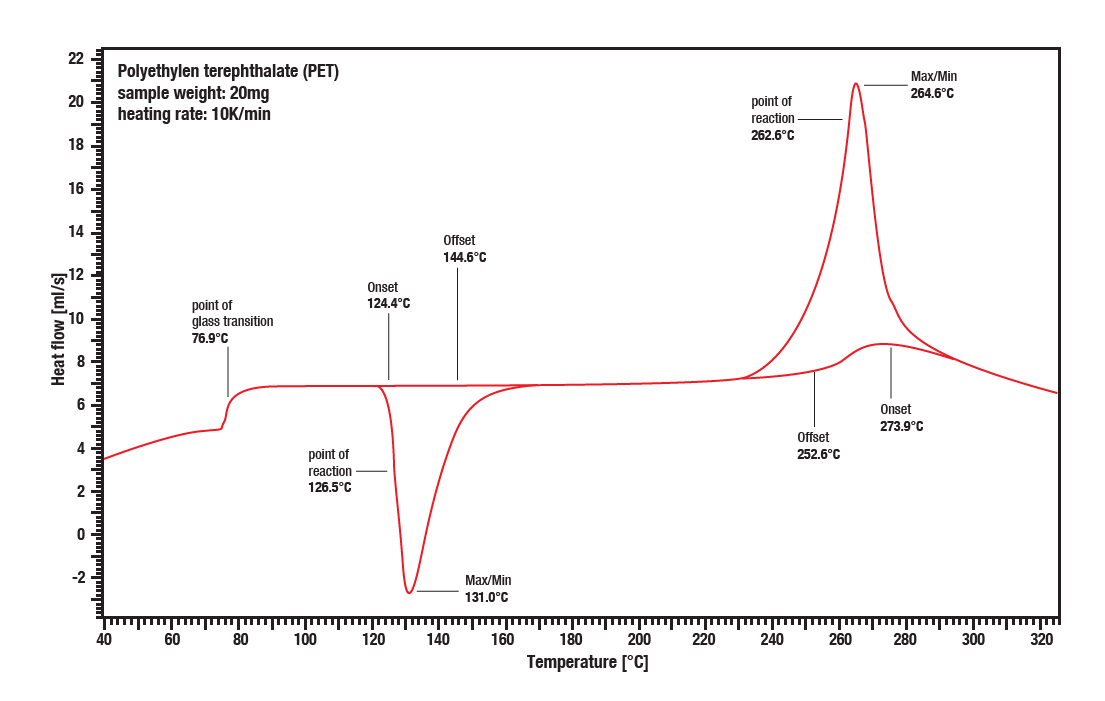 Introduction and Application: Polyethylene terephthalat is a thermoplastic polymer resin of the polyester family and is used in synthetic fibers, beverage, food and other liquid containers, thermoforming applications, and engineering resins often in combination with glass fiber. PET max exist both as an amorphous (transparent) and as a semi-crystalline material.

Analysis using DSC: PET shows at about 77°C a very significant endothermal glass point, when looking at partial crystalline thermo plastic materials. The relation between the exothermal cold crystallization (131°C) and the endothermal melting peak is a method for the degree of crystallization of the material. In the case of PET the crystalline part is very small, giving the material a very good transparency. This is why drinking bottles (Cola) are very often produced from PET.