An elastomeric polymer is a polymer sample that has a glass transition temperature that is usually lower than the temperature at which the material is used. The main characteristic of an elastomer is that is usually form stable but flexible and can be deformed under load while reaching its original shape after the load is removed. 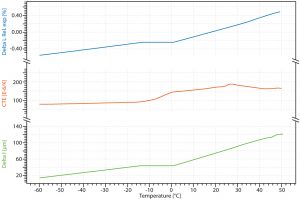 In this measurement example, an elastomeric sample was measured by a L75 horizontal pushrod dilatometer with liquid nitrogen cooling to determine the coefficient of thermal expansion below and beyond the glass transition range. Therefore, a rectangular piece of the elastomer was placed in the quartz sample holder. The instrument was then cooled down to -60 °C where the experiment began. Under a linear heating rate of 2 K/min, the sample was heated to 50°C and the expansion was recorded. As you can see in the scheme, there is a transition range between -10°C and 0°C where the expansion of the sample reaches a plateau. The CTE before and after this plateau shoes a significant different range which clearly indicates the different behavior of the elastomer before and after the glass transition point.