Substances react to a change in temperature with the change in their volume. This affects all areas of technology. In construction and in road, bridge and rail construction expansion joints must be planned, which absorb the longitudinal expansion of the building materials. In pipelines expansion compensators in the form of built-in pipe bends are provided. Overhead lines for the power supply must be designed in such a way that the wires do not break in winter and have sufficient distance to the ground in summer. The basis for the calculation of these and many other constructions is the thermal coefficient of linear expansion.

When storing liquids, a specified maximum filling level must be observed. Above the liquid level a space remains free, which absorbs the volume fluctuations. The calculation of such problems uses the volume expansion coefficient.
The terms derive from the fact that most substances expand when heated. With the few exceptions where substances contract when heated, the values ​​of the two sizes are negative. In the case of isotropic substances whose properties are independent of the direction considered, the volume expansion coefficient is three times the coefficient of linear expansion.

The expansion coefficients are material properties. They are determined experimentally and given in units of measure divided by Kelvin [1/K]. Kelvin is the unit of measure for absolute temperature and for differences in Celsius scale temperatures.

The exact measurement of the linear expansion is carried out with a dilatometer. The samples are heated in an oven. The temperature profile follows a precisely predetermined program, which allows the required heating rate, required temperature hold times and defined cooling processes. During this process the sample size is continuously recorded. The different dilatometers of the Linseis are optimized for special tasks and equipped with comprehensive evaluation routines. 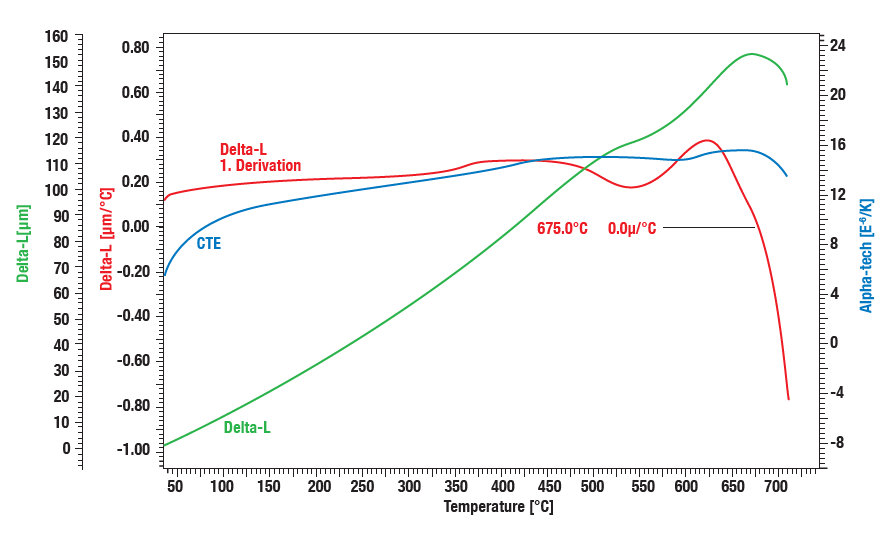 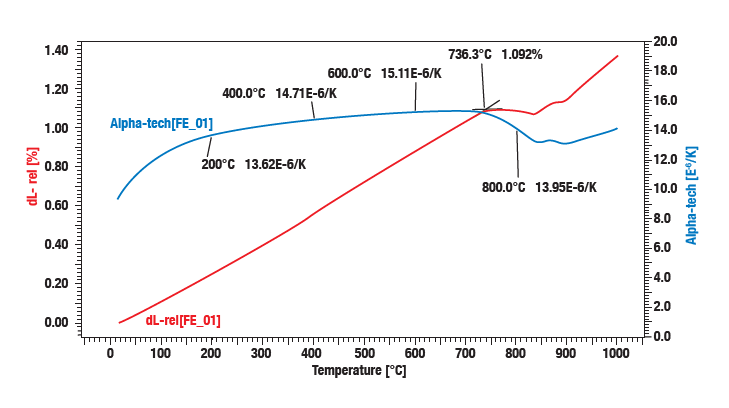 The linear thermal expansion (ΔL) and the CTE of the iron sample under argon atmosphere are evaluated. The heating rate was 5K/min. After 736.3°C (peak temperature of CTE) shrinkage was detected, which is due to a change in the atomic structure, known as the curie-point. The difference of measured and literature result can be attributed to contamination of the sample.