Using the Linseis LSR-Platform, thermoelectric materials in the form of solid material as well as in the form of thin films can be characterized almost completely. In the basic version – LSR-3, both the Seebeck-Coefficient and the Electrical Conductivity (or resistivity) of solid materials can be measured fully automatically and simultaneously up to a maximum temperature of 1500°C.

The basic version can be combined with various options to expand the range of applications. For example, the low-temperature option allows fully automatic measurements with LN2-cooling down to -100°C. The use of a special thin-film adapter extends the measurement range and allows to measure foils and thin layers. An optional camera allows the determination of the electrical conductivity with highest accuracy and the use of the “high-ohm” option allows a significant extension of the measuring range in order to characterize also electrically poor conducting samples.

In order to calculate the thermoelectric figure of merit ZT , which is widely used for the comparison of the efficiency of thermoelectric materials, it is required to know the materials thermal conductivity, in addition to the Seebeck-Coefficient and the electrical conductivity. For the measurement of the thermal transport parameters, commonly a further measuring device, such as a LaserFlash, is required.

To solve this problem, either an additional LaserFlash can be integrated into the Linseis LSR platform (see LZT-Meter) or a special adapter can be used, which allows the characterization of solid materials using the so called Harman method. It allows a direct ZT determination, which, in combination with the two original measurements of the Seebeck-Coefficient and electrical conductivity, allows conclusions to be drawn about the thermal conductivity. An LSR platform with integrated Harman method will be named LSR-4 due to the significant added value. By means of an optional extension of the measuring electronics, the ZT value for modules (TEG) in the LSR-4 Platform can be determined in the form of an impedance spectroscopy in accordance with the same fundamental measuring principle.

A cylindrical, square shaped or rectangular sample is positioned vertically between two electrodes. The lower electrode block, and optionally also the upper electrode block, (for inverting the temperature gradient) contains a heating coil (secondary heater). The entire measuring arrangement is located in a furnace, which heats the sample to a certain temperature for the measurement. When this temperature is reached, the secondary heater in the lower electrode generates a predefined temperature gradient along the sample. Two laterally contacting thermocouples T1 and T2 now measure the temperature difference (ΔT = T2 – T1) between the hot and cold contact on the sample. In addition, one of the two thermocouple leads is used in each case to measure the electromotive force dE (or thermovoltage Vth) that occurs.

A unique spring mechanism allows the best possible electrical contacts of the thermocouples to the sample and thus highly accurate measurements. From the obtained measurement data, the Seebeck-Coefficient can then be easily calculated according to the following formula: 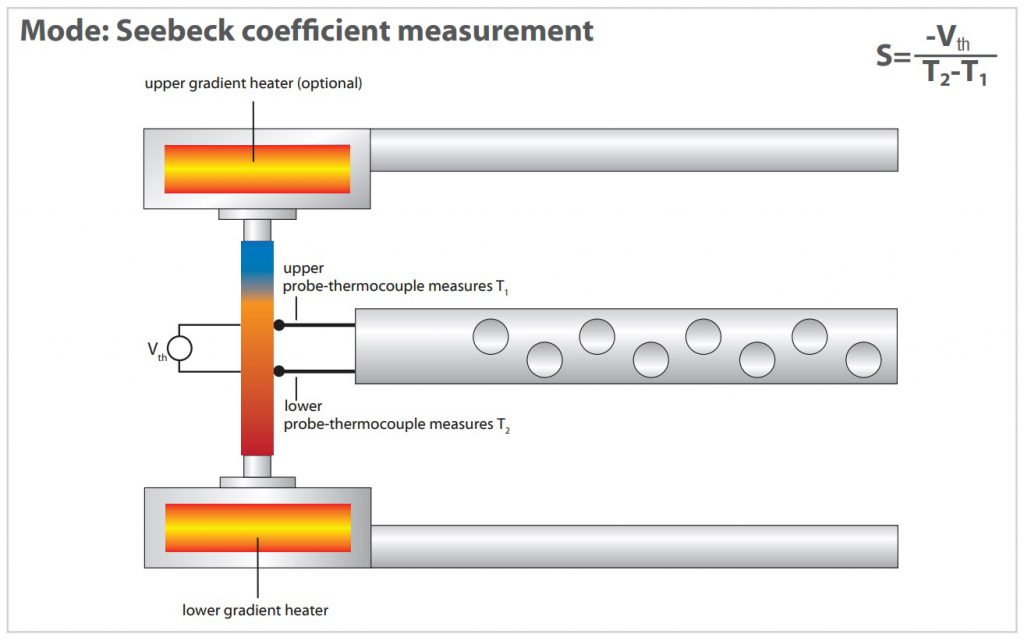 In order to determine the specific electric resistance (or the electrical conductivity) of the sample, the DC four-terminal measurement technique is used. As a result, parasitic influences such as contact or wire resistances are suppressed and the measurement accuracy can be significantly increased.

For the measurement under thermal equilibrium conditions (ΔT = 0K), a constant direct current (IDC) is impressed into the sample by means of the two electrodes. Due to the electrodes and sample dimensions, a nearly ideal one-dimensional current flow within the sample can be assumed. The resulting voltage drop (VΩ) over a portion of length “t” of the sample is again measured using one of the two thermocouple wires. 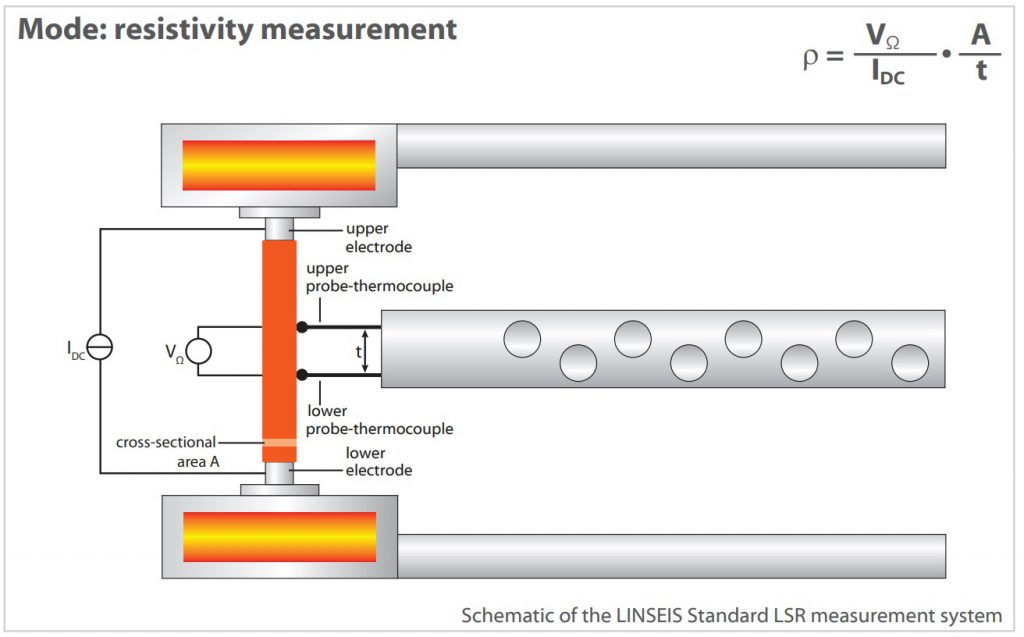 Principle of a Harman measurement

The Harman method allows the calculation of the thermoelectric figure of merit ZT of a material from the measurement of the temporal voltage curve of a sample with applied direct current (DC).
For the measurement, a current is impressed into a thermoelectric sample via two needle contacts. Due to the Peltier effect, one of the two transitions is locally heated or cooled. As a result of this, a characteristic temperature profile is established over the sample due to the adiabatic boundary conditions. If the ratio of the measurement of the initial voltage drop (ohmic part without temperature gradient) and the measurement of the stationary voltage drop (including thermal voltage) is calculated, the dimensionless figure of merit ZT (and hence the thermal conductivity lambda) can be calculated from this.

The fundamental advantages of the Harman method compared to calculating ZT from single measurements is that only one instrument is needed, only one sample needs to be prepared, and the resulting measurement error for ZT is significantly smaller due to the direct measurement. The disadvantage, on the other hand, is that the measuring method can only be used for good thermoelectric materials and up to a maximum of 400°C. 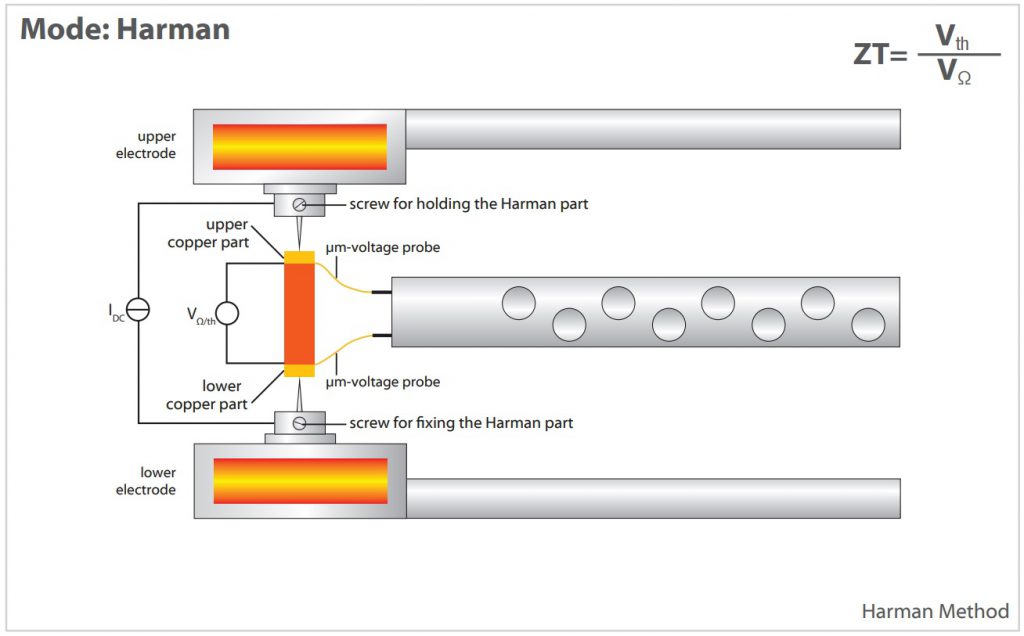 Adapter for thin films and foils

Due to their unique properties compared to bulk materials, the interest in nanostructured samples, such as thin films or nanowires, has increased significantly in recent years. To meet the demands of today’s research, LINSEIS has developed two different sample holders for free-standing films and films or coatings on a substrate for the LSR platform. Thanks to the unique design of the sample holders, a large number of differently prepared samples can be characterized in terms of coating thickness and production method with the LSR.

The LSR-Platform can be used to measure different sample geometries: cylindrical samples (up to ø 6 mm x 23 mm in height), rod-shaped samples (with a foodprint up to 5 mm x 5 mm and 23 mm in height) or disc-shaped samples (10 mm, 12.7 mm or 25.4 mm in diameter). The foodprint area of ​​the samples should ideally be smaller than or equal to the surface area of the electrodes, in order to ensure a one-dimensional flow of heat and electricity through the sample.
In the basic version, two different sample holders are available for the measurement. Although cylindrical and rod-shaped legs are the typical configuration in thermoelectric generators (TEG),  thermal conductivity measurements using a Laser or Light-Flash-System often requires disk-shaped sample geometries. In order to avoid time-consuming sample preparation steps and to also potential sources of error from the outset, the LSR platform can be equipped with an optional sample holder (developed in cooperation with german DLR), which allows to measure the Seebeck-Coefficient and Electrical Conductivity of disc-shaped samples. 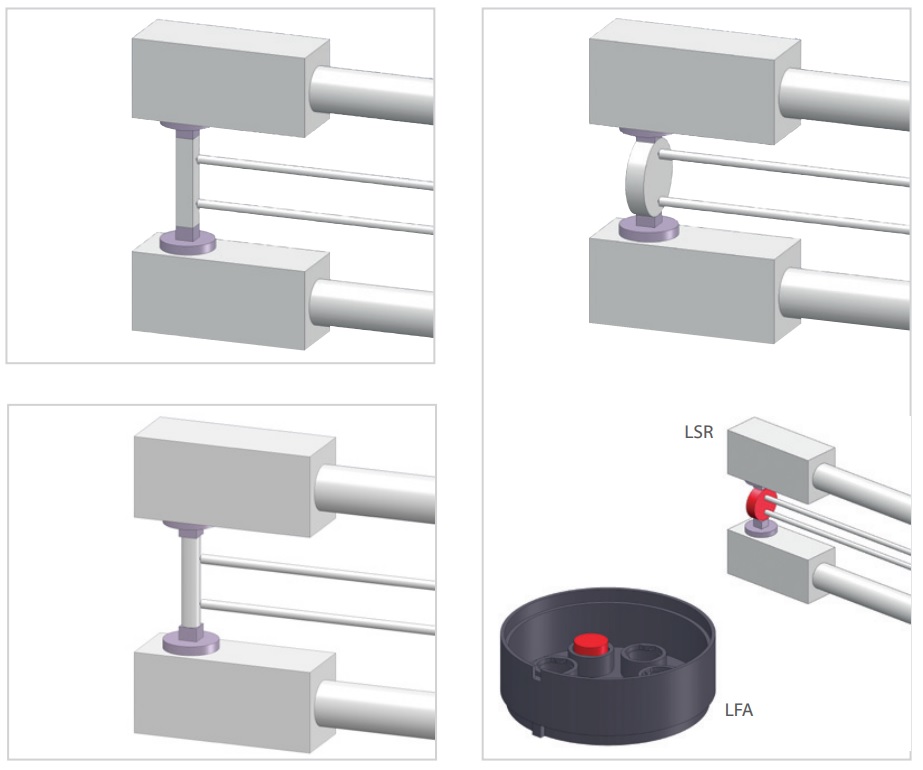 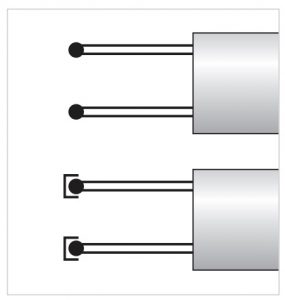 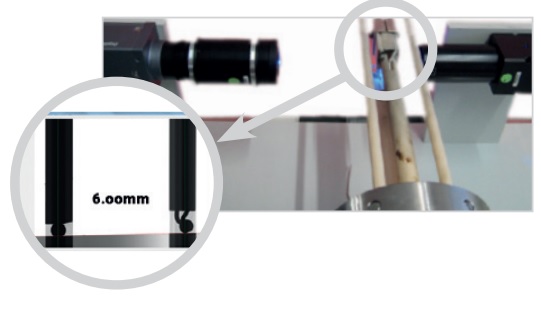 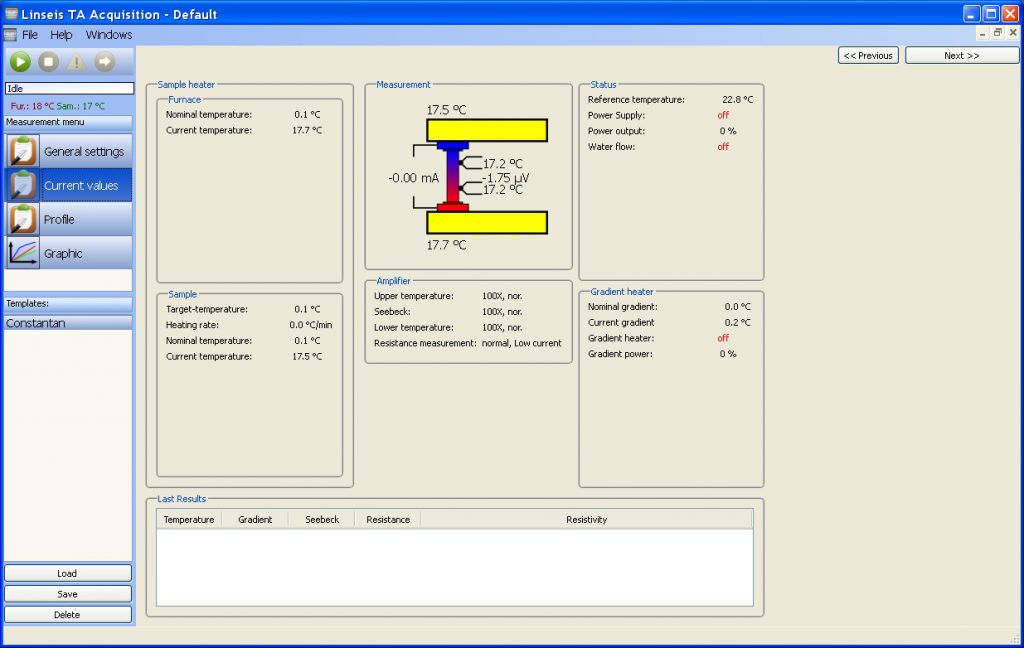 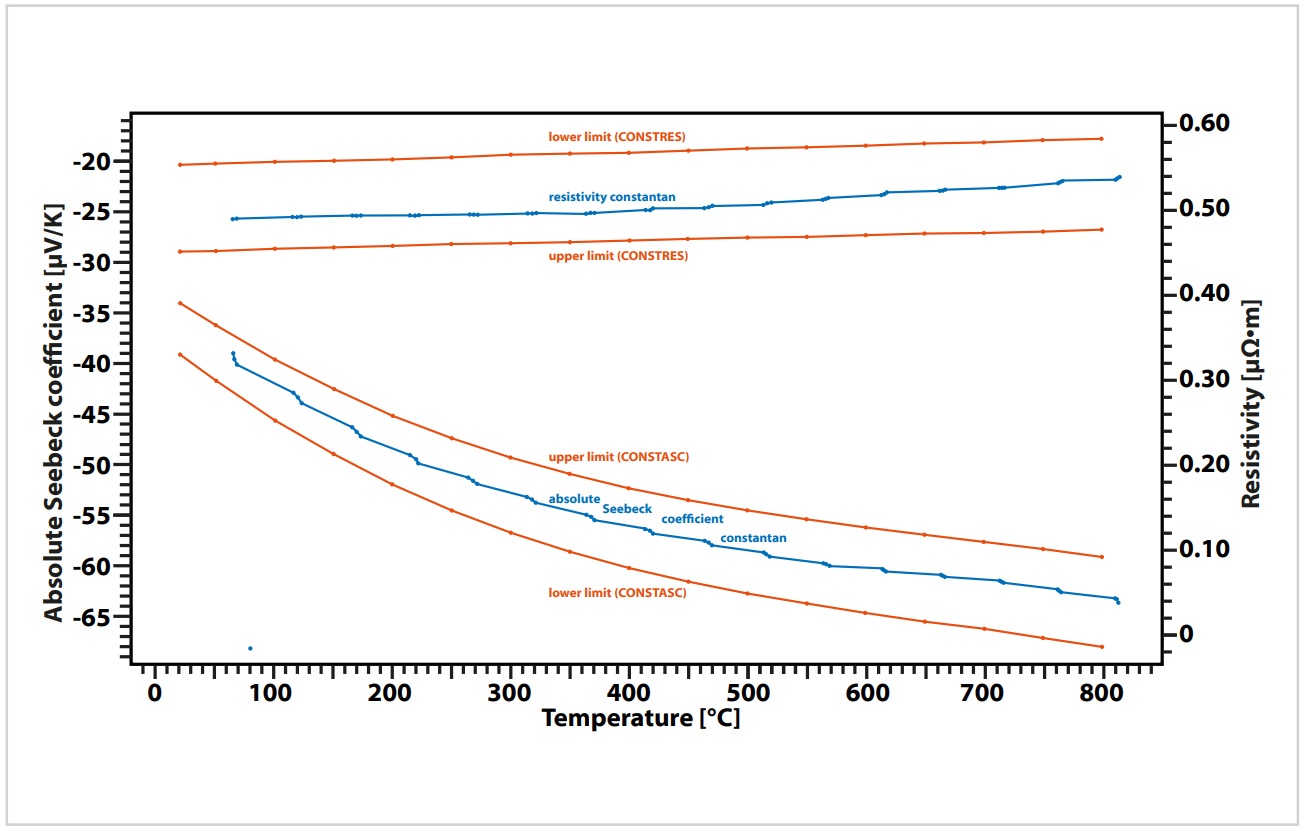 Silicon germanium alloys are high-temperature-stable thermoelectric materials that are most often used under demanding environmental conditions, such as space missions or at high temperatures for waste heat recovery. However, the following measurement was performed in order to check the low temperature behavior of a newly developed alloy. 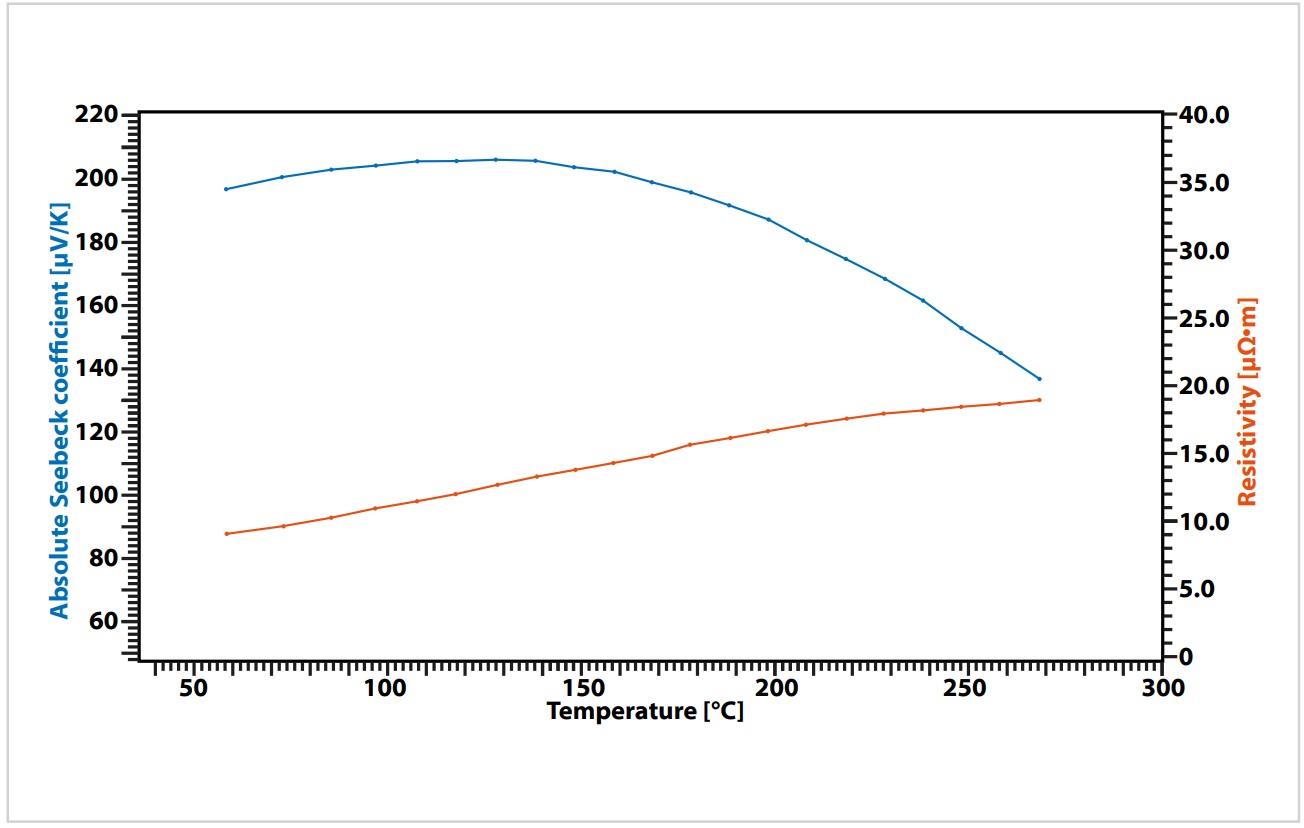 The following figure shows the measurement of the NIST (SRM 3451)™ Bi2Te3 reference sample, measured by the Harman method for direct ZT measurement in our LINSEIS LSR-Platform. The characteristic voltage distribution of the measurement can be clearly seen. The evaluation is carried out by setting the resistive component of the voltage in relation to the occuring thermoelectric voltage. The presented measurement is a single measuring point at room temperature. 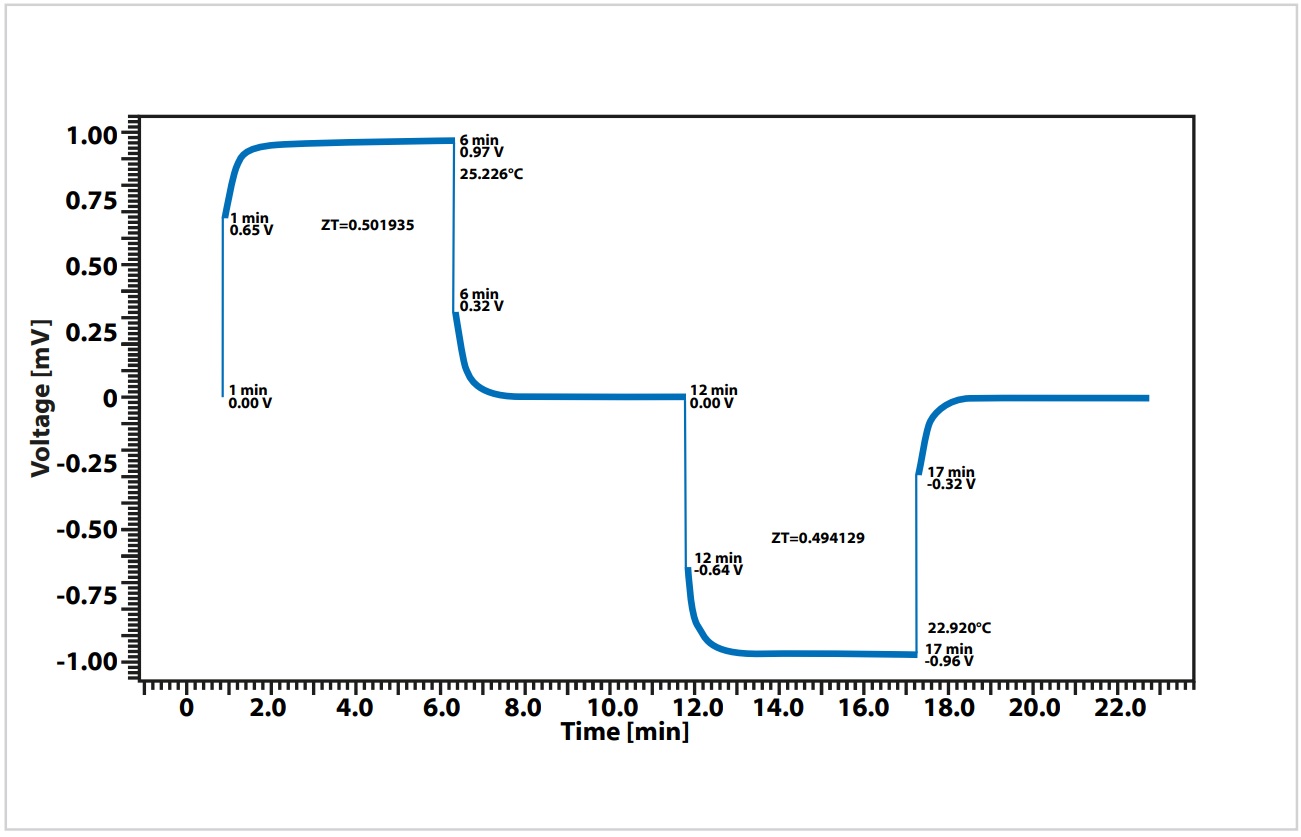