The horizontal dilatometer DIL L75 H was developed to meet the demands of the academic community and research laboratories worldwide. With this system, thermal expansion behavior of solids, liquids, powders and pastes for a variety of applications can be precisely determined. The unique design of this system guarantees highest precision, reproducibility and accuracy. This line of instruments is capable of performing measurements under vacuum, oxidizing and reducing atmospheres.

This system can be ordered in a single, dual or differential version for even higher precision or sample throughput. Optionally the mechanical and electronic components of the dilatometer can be separated to allow measurements in a glove box.

The following physical properties can be measured: 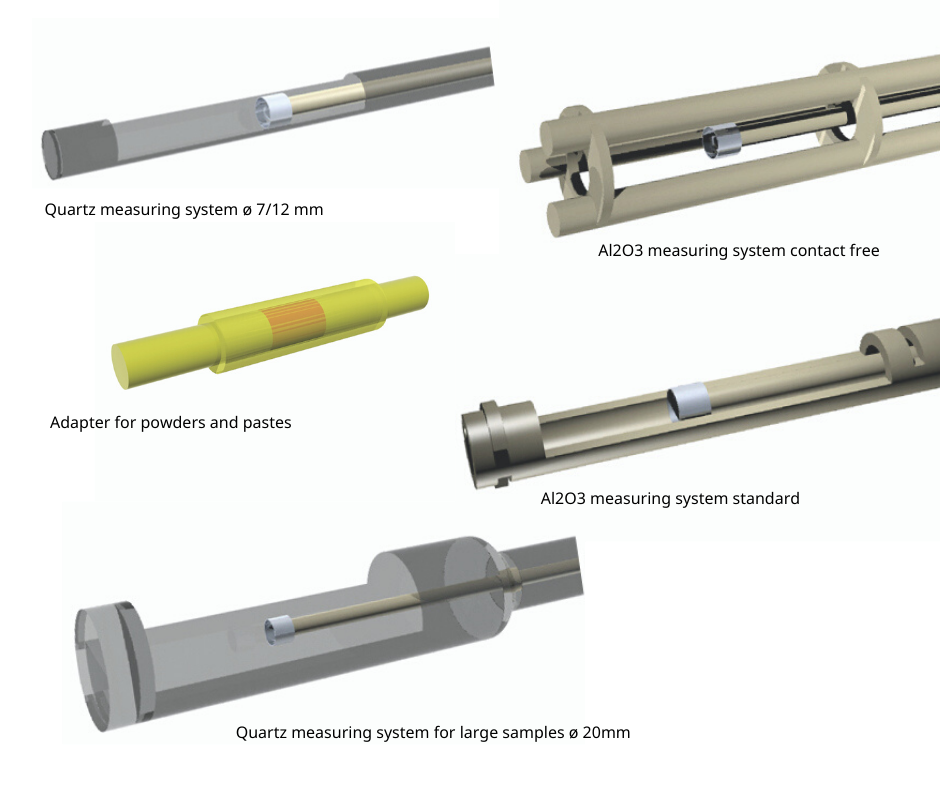 The LVDT (Linear Variable Differential Transformer) consists out of 3 coils: the LVDT body and the movable core. The primary coil is excited by a low frequency AC voltage. The two secondary coils are put in series with reversed polarity. The horizontal position of the core defines the amount of coupling between the primary and the secondary coils.

When the core is in the center position, the induced voltages in the secondary coils have the same amplitude. Due to reversed polarity of the two coils the sum (output voltage) is zero. When the core moves, the coupling between primary and secondary coils changes. So, in one secondary coil the induced voltages increases, while in the other the voltage decreases. So, the sum of both is no longer zero. The sum of amplitude depends on the amount of movement of the core, while the phase (polarity) depends on the direction of the movement.

A linear optical encoder uses a ruler, made of glass or metal, with a special optical pattern on it. Usually transparent and none transparent, or refl ecting and none refl ecting lines are used. A light source shines to the ruler, and the bright/dark transitions are measured. The count of measured transitions corresponds to the displacement, while the phase contribution of the two detectors A and B depends on the direction of the movement.

The software incorporates all essential features for measurement preparation, execution, and evaluation of a Dilatometer measurement.

The thermal expansion of rock crystal can be easily evaluated with the L75 Dilatometer. The additional DTA feature enables an in depth view of the thermal behavior of the material. The DTA measurement is a mathematical routine based on the sample temperature. Exo- and endothermic effects influence the change of the sample temperature during the dynamic heating or cooling cycle. At app. 575 °C the phase transition from takes place. The deviation of the measured temperature from the literature value (574 °C) can be used for a temperature calibration. 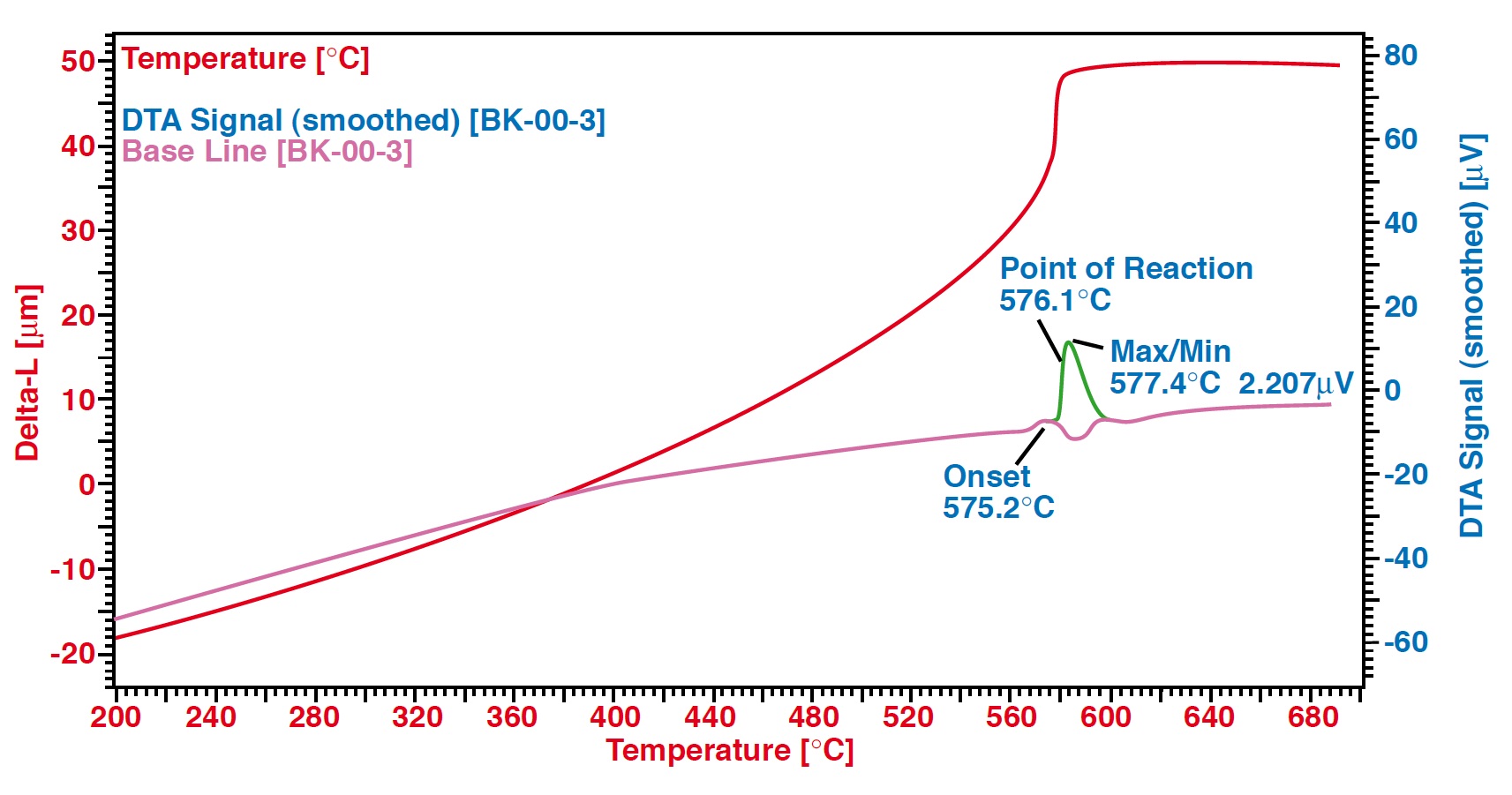 The linear thermal expansion (delta L) and the CTE of the iron sample under argon atmosphere are evaluated. The heating rate was 5 K/min. After 736.3 °C (peak temperature of CTE) shrinkage was detected, this is due to a change in the atomic structure, known as the curie-point. The difference of measured and literature result can be attributed to contamination of the sample. 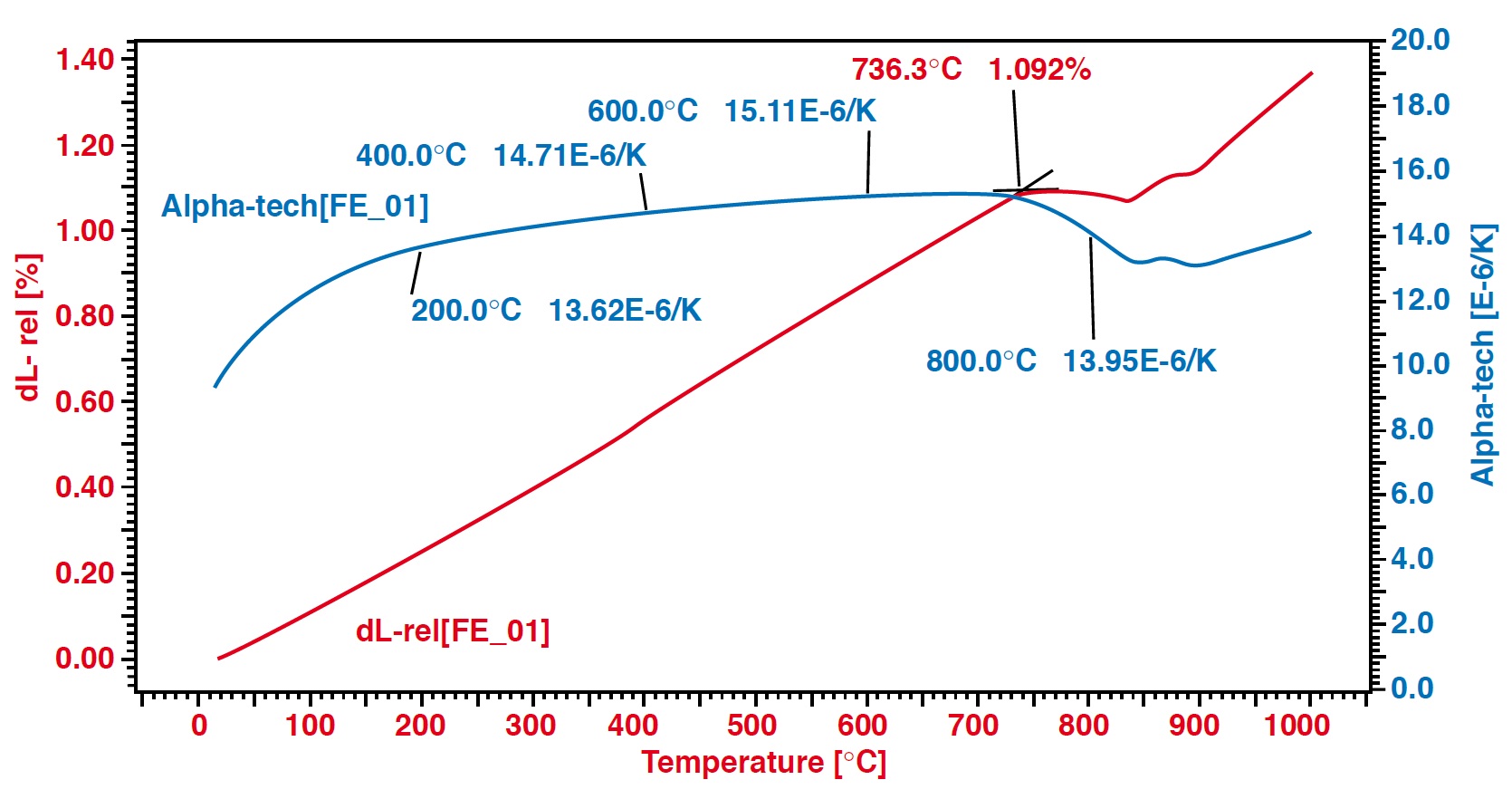